There are different types of saffron at different prices in the market.

The types of saffron in the division are related to the red and yellow parts of saffron.

Saffron in Iran is divided into three main categories.

-It is the most original and basic type of saffron

-It is obtained by stacking and drying a whole string of saffron (including stigma and cream).

The cream portion is usually 3 to 5 mm and the stigma depends on the quality of the saffron, longer or shorter.

– The arrangement of the strings in the bunch of saffron is either one-sided or two-sided.

Saffron is called 4th grade saffron in the classification of the National Organization for Standardization and also the standard 1-259.

The coloring power of batch saffron is between 120 and 150 units.

Difference between one-way and two-way layout:

In a one-sided arrangement, the stigmas and creams are stacked on top of each other.

Two-sided arrangement, stigmas on both sides and cream in the middle.

In the two-way arrangement, because the yellow part is in the middle, the stigma is more visible.

It is also called saffron girl or girl bunch.

In straw saffron, the red stigma part of the saffron string is 1 to 3 mm from the yellow cream part.

Because there is more stigma in this type of saffron, it has more coloring power than bunch saffron.

– Due to the connection of the stigma to the cream and the reduction of the possibility of being counterfeit, this type of saffron has attracted more trust from buyers.

Saffron is a grade 1, grade 2 and grade 3 in the straw saffron family.

Sargol saffron, in this type, there is no creamy part (root) and completely red stigmas are separated from each other, forming pure saffron.

In addition to Sargol, the titles Sarqalam, Sarresheh and Mumtaz are used for this type of saffron.

The similarity between Sargol and Pushal

In some cases, straw saffron is also called Sargol

In this case, it is divided into two types: Negin head and Mumtaz head.

Sargol Negin is in fact the above definition of Sargol saffron

– The coloring power of Sargol saffron is more than the rest and it is about 210 to 260 units.

Consumption of Sargol saffron is used more than other types.

– In Negin Pushal saffron, the stringy strands of red and thick stigma without the creamy part (yellow) are separated from the existing filaments and bulky saffron is prepared.

– The most luxurious and expensive type of saffron is Negin Pushal saffron.

– In different years, it has usually had a decreasing trend.

Because the production and sale of Negin Pushal saffron, due to the time-consuming and costly process and more activity required for processing,

In some cases, this type of saffron is also called Super Negin.

By separating Sargol saffron from the bunch, the root part of the saffron remains, which in Iran is called white or corner saffron.

– Contrary to some people’s belief that the corner has more perfume than Sargol.

– The valuable material of saffron lies only in its red stigma.

– Due to the presence of more moisture in the cream, more aroma of the cream is inhaled.

– Saffron corner is not included in the classification of saffron types, but because of its beautiful color and appearance

And that it is not possible to cheat is taken into account.

History of Saffron (2) (Breeding throughout history)

History of Saffron (3) (Minoans and Greco-Romans) 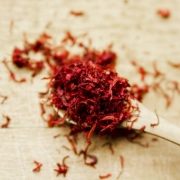 Application of saffron in different countries

Patterns of saffron cultivation in the world
Scroll to top